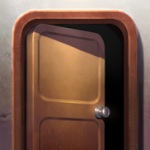 If you’re into room escape games, then you must check out Doors&Rooms for Android. Taking a somewhat different approach to these types of games it makes for an awesome alternative to what you might be used to.

Playing some other room escape games, you might be familiar with a multi-room concept where you must move between rooms, gather items and unlock doors. Doors&Rooms, however, takes a different approach. There are multiple stages for each level, and each stage consists of only one room and one door. Unlocking that door will get you through to the next stage. You’ll unlock this door by finding subtle clues in the room that occasionally disguise themselves as normal object. Its your job to decipher codes, make sense of puzzling graffiti and find the key to unlock the door. The first few stages of the game are extremely easy and act a straightforward tutorial to get you familiarized with collecting items, using them to unlock other items and exploring your item collection. Once you’ve become a pro, moving onto the second stage will start becoming more and more challenging. The game overall takes an incremental approach, with each subsequent stage becoming increasing more difficult. This is a good thing, because otherwise you’d run through the game in no time.

Overall, I though Doors&Rooms was a really cool and entertaining game. While the first several stages didn’t have me scratching my head, moving on to the later stages really intrigued me with how creative the puzzles got. If you like challenges and you’ve tackled a room escape game in the past then this a must have especially considering that it is entirely free if you don’t mind a little advertising here and there.