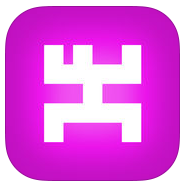 Puzzles are a great way to occupy time on your phone instead of brainlessly surfing Facebook, Twitter or the next best social media platform. Not only will puzzle keep your brain in tip-top shape but they also help pass the time quicker. My favorite part of puzzle games is that the’re always new concepts and topics. Today, we’re taking a look at a whole new type of puzzle, yet again – it’s called Kluchi.

Kluchi is a new spin on logical puzzles. It is extremely easy to play but difficult to master, like many puzzles worth playing. A fun fact about Kluchi is that it doesn’t really come with any instructions or manuals on how to play aside from a brief description in the App Store, which if we’re all honest, nobody really reads. The mystery behind how to play the game may be thought of as a puzzle itself and figuring out the strategies is intentionally part of the puzzle. That’s how I like to see it anyway. Regardless, I’ll try and give my two cents on how I think it should be played.

The game has two components. Domino-like block on the bottom half of the screen and a grid where you place them on the top half. Each domino block has two parts, the layout of which you can’t control. What’s interesting is that you don’t see that layout of the dominos until you start dragging the pieces, which makes it difficult to plan ahead without moving any pieces around. The layout can be side-by-side (vertical or horizontal) or diagonal. Now, the idea is to simply to all the puzzle pieces on the grid. Just like dominos, the pieces of similar kind can overlap each other but can never be duplicated on a single row. There’s a button that will let you occasionally swap a symbols on a predefined puzzle piece, which can mean the difference between success and failure.

While the rules might not make a whole lot of sense now, once you start playing everything will fall into place. Like I said, the game is easy to play but it’s by no means easy to succeed at. What I like the most about it is that it makes you think. You’ll inevitably run into roadblocks that will require memory, critical thinking and logic. If you’re interested in keeping your brain in great shape while having fun on your mobile device, Kluchi might be a really good fit for you!