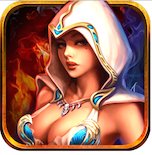 If you’re an Android user and you happen to like RPG games with online gameplay and chat, then you’re in luck because this next game that we are looking at is called Legend Online for Android.

Legend Online is a classic RPG for Android that puts you in charge of your hero. A character you choose at the beginning of the game will become your main soldier, who you will continue to teach new skills, upgrade weapons, fight enemies and other RPG-like adventures. If video games were a part of your life in the mid 90s, then you might remember a game called Heroes of Might & Magic. For some reason, this is what Legend Online reminds of probably because it has a slightly similar feel. While you don’t actually move your character around on a map, you do interact with various buildings that can provide you with new skills, upgrade opportunities and of course, the battles that you must win in order to gain coins and valuable experience that will be essential in moving forward in the game. The battle scenes are kinda cool, but I wish that they weren’t just automatically handled by the computer AI. Even still, you do play a decent role in how likely your army is to win the battle but providing it with the resources it needs to do so.

Overall, the game is well put together, has tons of features and a thorough tutorial to guide you at the very beginning. Don’t underestimate a good tutorial, because without it, the learning curve is very very steep. Even after completing the tutorial, I must say that I was somewhat confused as to what should happen next. Eventually, you’ll catch on and it’ll become second nature if you really get into the game. If you like RPGs, this is definitely something to check out for your Android device.