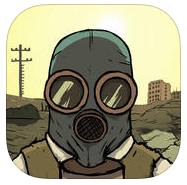 Nowadays the App Store is filled with fast-paced animated actions games with many of them produced and developed by multimillion-dollar corporations. Today, however, we’re taking a look at something a little different and debatably a little bit better too. It’s an excellent adventure called 60 Seconds! Atomic Adventure.

The 60 Seconds adventure is based on the classic atomic apocalypse scenario where after a nuclear detonation you have to survive for as long as possible in an underground bunker with materials and supplies that you should have collected before the bombs went off. Before the explosion, a high-tech warning system will give you anywhere from 30 to 60 seconds to scavenge your surroundings for any supplies, people and survival gear that you might need to make through a long and painstaking wait underground. The game offers several scenarios, each of which can be easier or harder by limiting scavenging time and introducing more problems and villains into your story. The gameplay is not animated or action-based. Instead, all the events are written in a journal that you read every day of your survival. Based on information provided you’ll have to make decision on how to ration remaining food, whether or not to go out on expeditions for more supplies and how to deal with spontaneous events like intruders and casual visitors. You decisions directly impact the fate or your characters and if all of them die, it’s game over.

60 Seconds! Atomic Adventure is one of the coolest games I’ve played lately. It’s definitely different and unexpected. The pace is slow and relaxing, allowing you to really get to know the characters and make informed decisions. With ample time to absorb the content and make educated guesses on possible outcomes, you’ll really enjoy making as far as you can in your atomic shelter. The only complain I have is the size and style of the font used in the journal. I really wish it was bigger and easier to read since the game revolves so heavily around reading. Otherwise, 60 Seconds! Atomic Adventure is an excellent game for your iOS device and I’d recommend it to just about anyone!

Check out 60 Seconds! Atomic Adventure for iOS on the App Store!