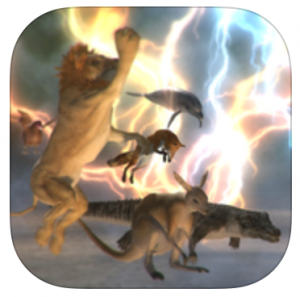 When it comes to the most intense button-mashing games on any platform, I think fighting games definitely take the cake. Rarely is there ever a strategy or even skill necessary to playing a fighting game but it is most certainly difficult to master.

Today, we’re taking a look at Animelee for iOS. Available as universal app for both iPhone and iPad, Animelee is an entirely different twist on classic fighting games like Street Fighter and Mortal Combat. As the name suggests, in Animelee, the characters you’ll be fighting are animals of different species. In fact, all species of animals can fight each other and bring unique advantages to the match. Some will be quick like the fox. Others will be more powerful like the bear. Depending on which animal you chose and who your opponent will be, button mashing may or may not be the right decision. The gameplay is what you’d expect. The iconic D-Pad in touch form on the left and action button on the right resemble a physical controller that you might find on a console. Using various combinations you can perform standard attacks and special moves that inflict more damage. The first animal to deplete the opponents health with the round. Best 2 of 3 will win the match.

Overall, I thought Animelee was a pretty cool spin on a fighting game. The graphics are cool and the gameplay is immersive but for me, personally, animals just don’t really do it. I’d prefer to see ninja, warriors or something along those lines. Nevertheless, Animelee still delivers so if you’re on the market for a great fighter, you should definitely give Animelee a try.

Check out Animelee for iOS on the App Store!