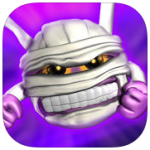 Physics-based games on iOS are blast. Just look at Angry Birds if you have any doubts regarding how addicting they can be. Fortunately, today we’re taking a look at yet another great reincarnation of a physics game called Bungee Mummy: King’s Escape.

Bungee Mummy is phenomenal game with a unique spin on physics are incorporated. Bungee Mummy doesn’t just use physics, it relies on them for the game to function. Your character is a ball-shaped, friendly looking, mummy head. The goal is to complete each level by getting your mummy from one end of the level to the other. To do so, you must swing him like a monkey swings on vines, except here, you’re using bungee cords. Tapping on various anchor points like logs, walls, floor, etc will get you a connection that will inturn apply momentum and force to your mummy head. You must strategically select connections that will swing your mummy across the level. Alternatively, you can cut connections and pull back on the mummy head to bungee launch in any direction you like. Along the way you’ll also collect golden scarabs, defeat snakes, unlock doors and overcome other obstacles that stand in your way. The faster you get through the level, the most pyramids (stars) you’ll earn upon completion.

Overall, I really enjoyed Bungee Mummy. Its very unique gameplay is very entertaining and exciting. I love physics games primarily for this reason – you are free to do what you like without being locked into some predetermined scenario. Everytime you play a level, something will be different. The only complaint I have is that it looks a tad small on an iPhone screen. The game is REALLY gorgeous on the iPad, though, so if you have the choice, go for the iPad. Bungee Mummy was a blast to play and I would highly recommend it to anyone who likes to play fun games on iOS.

Check out Bungee Mummy for iOS on the App Store.