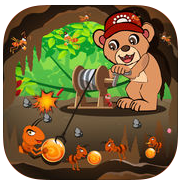 Games you can play with just one hand are a great source of entertainment. They don’t require your full attention and yet are still engaging enough to be entertaining. Today we’re taking a look at one such game called Candy For Bears and it’s all about that candy. Just in time for the holiday season.

Candy For Bears puts you in the shoes of a bear digging for underground treasures – candy. These buried treats come in all shapes and sizes, affecting how difficult it is to retrieve them. You’re playing as one of the bears whose responsibility is to retrieve a specific amount of candy before the time runs out. The bear is on the surface but candy is all below ground so in order to retrieve it, we’ll have to guide the claw in the correct direction. The claw will continuously pan from side to side. Tapping anywhere on the screen will launch it in the direction the claw is facing in that instance. It will begin extending and if it hits a piece of candy, you’re in luck! Be careful though, if you hit a rock, which has no value, you’ll be losing precious time reeling it in. The more candy you grab in the allotted time, the higher the score. You’ll also have access to various powerups like a guided claw, dynamite and many others.

Overall, I thought the game was actually pretty fun. There’s funky music and it can be pretty challenging at times as well. Playing it is easy but sometimes you’ll need to make very precise movement, which can require some focus and finesse. The graphics did look a little on the blurry side and somewhat stretched on the iPhone 7 Plus but I don’t think the target audience would care too much for further refinement. Pretty neat game all in all and I highly encourage you to check it. Also, keep in mind that 10% of all in-app purchase proceeds will be going towards diabetes research so A+ for that!

Check out Candy For Bears for iOS on the App Store!