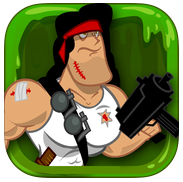 Killing zombies is an incredibly addicting affair. So many games these days are focus on putting you front row and center in the battle against the dead. Now, with Crazy Zombies Game there’s yet another way to enjoy incinerating your favorite enemy.

Crazy Zombies Game is a cool spin on these monsters. It is a level-based, 2D shooter, which sort of resembles Angry Birds. The idea is simple, tap and drag to aim your gun at your zombie targets and shoot. Bullets will bounce off walls and follow their natural trajectory. This becomes relevant when you need to kill more than one zombie with a single bullet or when zombies hide in areas that you can’t reach directly. In fact, that’s the hardest part about the game. You can always land the initial shot with precision but the bouncing from walls get tricky. I’d say the gameplay is almost a cross between Billiards and Angry Birds. As you progress through the levels, the challenges get increasingly more difficult. Zombies begin walking, hiding in tough-to-reach places, and obstacles prevent direct access to the zombie brains. Did I mention headshots get you extra points?

Overall, Crazy Zombies Game is a pretty awesome zombie shooter. Unlike many other 2D shooters, this game is lively, fun and the physics really add to the gameplay. The graphics aren’t exactly top-notch but in a game like this, it matters very little. All in all, I enjoyed playing Crazy Zombies Game and I’d recommend this to anyone dreaming about the next zombie apocalypse. Definitely give this game a shot, its available on the App Store for free!

Check out Crazy Zombies Game for iOS on the App Store!