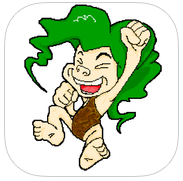 Slow-paced puzzles are a great way to kill some time on your iPhone or iPad. Today, we’re taking a look at a puzzle that is just that. Nice and slow, but not by any means easy.

Ogg! for iOS is about a caveman named Ogg who lives in the prehistoric times when the dinosaurs roamed the plains. The premise of the game is to help Ogg solve his day-to-day tasks by flipping boards, bones and switches in the right directions so that he’s able to hit the target with various tools. Ogg is always positioned at the top of the screen and he’ll want to drop some object. Depending on the directions the deflectors are facing, the object will bounce and roll in the logical direction. While the game is not strictly-speaking physics-based, it does have an engine to determine momentum, drag and other factor that affect the object. The idea is that you must tap and rotate the deflectors such that the object travels along the correct path and collects all the stars, power ups, etc. Upon successful completion you’ll move on to the next level and so on.

Overall, Ogg! is a simple puzzle game that really doesn’t bring anything fancy or extravagant to the iOS gaming world. This, however, isn’t a bad thing. It lets players focus on the important part, which is solving the puzzle. Progressing from level to level, the puzzle get tougher and more challenging to solve. Unlike many other puzzle games on the market, Ogg! is actually challenging and can be quite a head scratcher at times. If you’re looking for something a little more than a casual puzzle, check out Ogg! for iOS to really give you something to think about.

Check out Ogg! for iOS on the App Store!