Save the Snail HD for iOS – Game Review 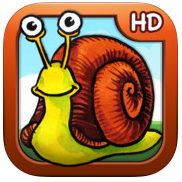 I personally enjoy physics games. What I mean by “physics games” is any games that simulates gravity and object interaction in a life-like manner. One such game is Save the Snail HD and its absolutely superb.

Save the Snail HD is all about saving the loveable little snail characters from either heat waves or occasional falling rocks. You’ll do so by dropping objects with the help of gravity and constructing barriers around the snails to protect them. Often times this not only involves simple obstruction from offensive sun rays or rock but also cleverly positioning the snails such that they are safe from incoming danger. The game involves some logical thinking as well because the levels are designed in such a way that simply dropping object over the snails will not protect them. In fact, some levels are quite challenging and can you a little while to decipher, but at the same time, easy enough that you won’t be stuck there for hours. It is definitely a good combination of difficulty, fun and logical thinking.

Overall, I thought that game was brilliantly made. The in-game physics are realistic and interacting with objects is as life-like as it gets. Graphics are top notch, and my favorite by far are the snail characters with their quirky comments on speech bubbles and sound effects. Everything in the game is well thought out and its my pleasure to recommend Save the Snail HD to anyone who enjoys games on their iOS device. My only complaint is that I’d like to see more levels from such a well put-together game, which I’m sure will be coming in later additions and updates to Save the Snail HD.
Tagged with → app review • appshrink • featured • iphone app • iphone review • save the snail hd
Share →
Tweet