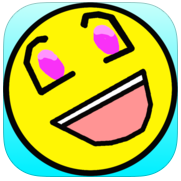 Boredom is interesting. On one hand you’ve got absolutely nothing that peaks your interest. But at the same time, your mind can’t seem to stop racing about things you could be doing. Today we’re taking a look at a game that you can play for 5 seconds. Perhaps longer. Perhaps not.

Slippy Sam is a brutally simple game. It won’t marvel you with its graphics and engulfing game play. It won’t even entertain you for all that long. What it will do, however, is occupy those small bits of time you have amidst your busy schedule because let’s be honest. Who has time for boredom? Playing Slippy Sam just takes one finger. Your little yellow character will roll from one side of the screen to the other depending where you place your finger. Tap left to go left. Tap right to go the other way. Simple. The idea is to avoid falling crates that resemble bite-size jail cells. You don’t want to get stuck in one of those so keep moving. The longer you keep up the charade, the higher the score at the end of your boredom sprint.

Overall, I’m not sure I really have an opinion on Slippy Sam. It was clearly conceived to be nothing more than just a proof of concept and it has succeeded. With a grand total of just one screen you’ll be able to endlessly tap the play button after you inevitably get trapped in a micro-jail to start at square one. And you won’t even notice the transition. In fact, it’s so seamless, you might not even notice. And that’s fine, because you’re just that bored.

Check out Slippy Sam for iOS on the App Store!