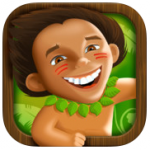 Games like Temple Run and various other clones have been around for a little while. Today, comes yet another one known as Spirit Runner. Let’s take a look.

Spirit Runner as the title may suggest, is a “runner” based game just like Temple Run. The idea behind a game like this is quite simple. Taking on the role of running character, the user’s job is to avoid obstacles by swiping the screen to accomplish evasive maneuvers. For example, swiping the screen up will make the character leap over fallen trees, water and allow the character to pick up “good” spirits to increase the overall spirit level. Doing so will achieve temporary invincibility, which is always welcomed. Other tactics involve sliding on the ground via a swipe down as well as the most important evasive gesture of them all – lateral movement. Swiping side to side will allow the character to move to one of the three lateral positions: left, center or right. The idea is to keep running for as long as possible without crashing into anything. The longer the run, the higher the score.

While the idea is not new, Spirit Runner does offer several original concepts such as the various “power-up” type potions that allow for lateral movement in mid air and double jumps. I think the biggest problem I have with the game is the how the character dies. There are no warnings, death animations or anything along those lines. The game simply abruptly ends with a screen that has you run summary on it. To me, it almost seems unfinished. Other than that, Spirit Runner seems like a cool little runner-style game. If you’re into those, goes ahead and give it a try.

Check out Spirit Runner for iOS on the App Store!