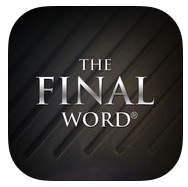 Modern technology and styles are often assumed to be unique to the era that adopts them but often times, they are iterations on the past. One such piece of retro entertainment is a sound-board-style speaker – the final word.

If you were born in the 70s or 80s, you might recall coming across one of these retro gems back in the 80s and 90s when they used to be popular. Unfortunately for the fans of this toy, production seized in the mid 90s and it was discontinued for good. Until now. Believe it or not, this simple and seemingly stupid single-button speaker has been resurrected from the dead in the form of an iPhone app that looks and behaves exactly like the original used to about 30 years ago. If you’re not familiar with the toy, I’ll explain. You press a button and the speaker spits out profanity of all kinds. Its funny and entertaining but the enjoyment is short lived since you can only laugh so much at the endless loop of insulting phrases. Chances are, that’s why it never stuck around as a popular kids toy. Regardless, now you can have your own slice of nostalgia by downloading the final word on your iPhone.

The value this app brings is extremely subjective. For someone who’s been around to witness the original physical toy, this might be an epic way to bring back childhood memories and relive the past. If you’re too young to remember the early 90s, chances are that you’ve missed out on this opportunity. The final word will look like a complete waste of time to you. Which ever category you fall under, just know that if you’ve ever wanted to insult somebody without saying it yourself, this is the app for you.

Check out The Final Word for iOS on the App Store!