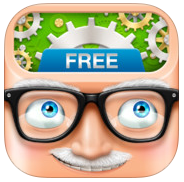 Social games on iOS devices are great because they combine interaction with people and electronic devices. One such game that does it well is called Trivia With Pals.

Trivia With Pals, as the name suggests, involves challenging your friends, family members and co-workers to fun and friendly trivia question that are also capable of earning you coins and in-game money. Trivia With Pals lets you invite your Facebook friends and challenge them in correctly answering 8 questions. The difficulty of the questions depends on your current IQ level. Now, this IQ has very little to do with your actual IQ and intellectual abilities and more so with the number of question you answer correctly. Granted, the smarter you are the more questions you are likely to get correct, but the questions in the game hardly resemble anything you’ll find on an IQ test. Regardless, they can be a lot of fun and definitely challenge your social knowledge more than anything. Among the questions you’ll find topic such as music, movies, sports, popular culture and the like. Trivia With Pals is also turn-based, which means you don’t have to sit there waiting for your opponent and you can go ahead and start a new game. This keeps things interesting and allows you to easily play with multiple people simultaneously.

Trivia With Pals overall is well built and features a relatively easy-to-use interface. The reason I say its “relatively” easy is simply because there can be a lot buttons on the screen and if you don’t know your way around the app, it can be somewhat confusing as to the function of each button. Occasionally you’ll also be redirected to a link in Safari which is an inconvenience that you’ll learn to deal with. All in all, its a fun game and at the cost of zero dollars, definitely something to check out.
Tagged with → app review • appshrink • featured • iphone app • iphone review • trivia with pals
Share →
Tweet