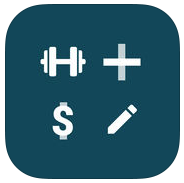 Converting units is tricky thing sometimes. Can you quickly convert 13 meters per second to miles per hour in your head? Probably not. For those tough calculations there’s applications to help you get the numbers you’re looking for. Today we’re taking a look at such an app, called Units Currency Calculator+.

Units Currency Calculator is exactly what it sounds like. It converts between various units and it comes with an added bonus of being a calculator, a notes app and a currency converter all at the same time. The app is nothing fancy but it gets the job done. You’re able to search for the units you wish to convert and then rotate the drum on either side to scroll between units of similar type like meters, kilometers, miles, etc. Switching between different types will require you to either use the side menu via the hamburger button or go back to search. Like I mentioned, the app is also a simple note pad as well. It really doesn’t offer any features beyond plain text input but it can be handy to keeping track of notes related to unit conversions.

Overall, Units Currency Calculator seems like a less-than-average solution for unit conversion. Given the fact that any unit conversion can be easily accomplished via Siri, a unit conversion app has to offer significantly more features to stay competitive. Another thing that is a big turn off for me is that unit results are given in scientific notation, which you might think is okay, but seeing 1.2964e1 km/h when I’m converting 7 knots is quite annoying. Why can’t it just say 12.9 km/h? Having said, if you’re looking for a jack-of-all-trades kind of unit converter, this one is definitely it.

Check out Units Currency Calculator for iOS on the App Store!