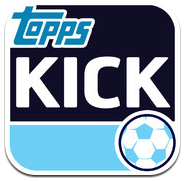 As a follow up to its popular BUNT MLB digital trading card game, Topps officially launched KICK this morning. KICK is the exclusive iOS Barclays Premier League digital trading card game for everything English football fans love about collecting and trading their favorite players—and more. It’s especially handy if you live in an area that doesn’t broadcast the games. Next up is Fulham vs. Arsenal on Saturday, August 24th 2013 at Craven Cottage.

Some of the features include: authentic and official collecting; real-time valuation of cards where players’ actually performance will reflect on the value; playing and trading happens with real people. Getting started is easy, simply create an account, pick your club allegiance, get coins, and start opening your first packet of cards. From there, you’ll soon be chasing, trading, and playing your way to the best collection of Barclays Premier League digital cards, the widest assortment of KICK Awards, the most points, and the biggest bragging rights in the football world.

One Response to The Topps Company releases TOPPS KICK for iPhone